Warning: number_format() expects parameter 1 to be float, string given in /data/web/virtuals/7298/virtual/www/wp-includes/functions.php on line 425

With Microsoft Dynamics 365 Business Central 2020 Wave 1 (respectively with Runtime 5.0) a new object type has been introduced – Interfaces. This term is well known from other programming languages and probably a lot of readers have already used them in some way.

The general definition of the interface object could be found anywhere on the Internet. For example, the definition on Wikipedia:

The term interface is used to define an abstract type that contains no data but defines behaviours as method signatures. A class having code and data for all the methods corresponding to that interface and declaring so is said to implement that interface.

An interface is thus a type definition; anywhere an object can be exchanged (for example, in a function or method call) the type of the object to be exchanged can be defined in terms of one of its implemented interfaces or base-classes rather than specifying the specific class. This approach means that any class that implements that interface can be used.

Usually a method defined in an interface contains no code and thus cannot itself be called; it must be implemented by non-abstract code to be run when it is invoked.

Okay, but what does it mean in term of programming in AL language? The interface described in the quotation above is the new special object type “Interface” and the “non-abstract class” is, in our case, Codeunit object with a special construction that defines that the Codeunites implements an Interface.

In the next part of this article series, I will describe Interfaces on the more advanced example.

Directions4Partners EMEA 2021 is still in progress here in Milan. I want to share all details about each day, but unfortunately, there are so many amazing things to see, watch and try I have almost no time. So today just a few words about the day before the...

END_OF_DOCUMENT_TOKEN_TO_BE_REPLACED 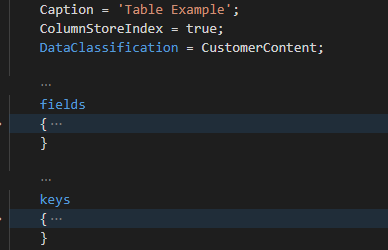 In just a few days the new major version of Business Central 2021 wave 2 will be introduced! This is again a huge set of changes that comes with this new version. In this article, we will look at the most important changes in AL Language performance (performance...

END_OF_DOCUMENT_TOKEN_TO_BE_REPLACED 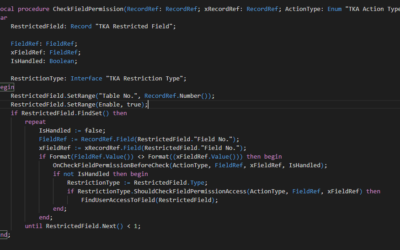 I just add a new project to my GitHub repositories. It is a new extension for Business Central that extends security functionalities with field-level permission. Using this extension, users are able to define who can or can not change specific fields in any table in...

END_OF_DOCUMENT_TOKEN_TO_BE_REPLACED

In the last weeks, I got some questions about installing the developer's preview version (the Insider build) of the Business Central. This version is available through Artifacts for docker similarly to standard versions; however, they are available only for Microsoft'...

END_OF_DOCUMENT_TOKEN_TO_BE_REPLACED

For a long time, if we wanted to get input from the user to confirm something, we used Confirm() method. This method is straightforward - it has two parameters (+ unlimited number of constant values similar to StrSubstNo() method). The first one accepts text shown to...

END_OF_DOCUMENT_TOKEN_TO_BE_REPLACED 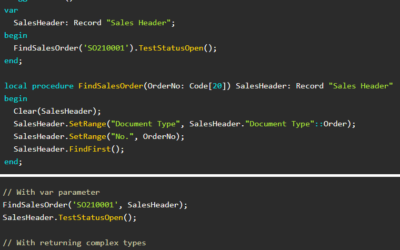 In Microsoft Dynamics 365 Business Central 2021 w1 (released in May 2021), a profound change was introduced to ways how we can design our applications Until this version, the only way to return complex data types (like records, codeunits, Lists etc.) was using the var...

END_OF_DOCUMENT_TOKEN_TO_BE_REPLACED

A few weeks ago, I described a solution for importing an Excel file to the Business Central using Excel Buffer in AL Language (see here). In today's article, we will look at how to build a more complex solution that can be used for file imports without the needs to...

END_OF_DOCUMENT_TOKEN_TO_BE_REPLACED

The Business Central Bootcamp conference is almost here! Let's check all sessions and find your favourite ones at https://events.powercommunity.com/business-central-bootcamp/. You can register for the event using this registering form for FREE! I am part of this...

END_OF_DOCUMENT_TOKEN_TO_BE_REPLACED

Not all fields in AL Language are stored in SQL Database. Flowfields are a great example of these fields. Flowfields are special field type that allows you to create a field that loads a value from another field within the same or even different table. In the AL...