In the new version of Microsoft Dynamics 365 Business Central, there are also some changes to the debugging and launch.json configuration.

Having more than one company within your development environment is rare. However, having more companies in a sandbox environment or in a production environment is not so unusual. In that case, if you needed to test your modification or debug something in a different company, you had to switch companies manually. The new version brought a new launch.json parameter “startupCompany” where you can specify the name of the company that should be opened.

Skip errors in the Try functions when debugging

Debugging some core processes could be really hard, especially if there are try functions. A quick reminder what is the try function – The Try function in AL Language is a special type of procedure in which any raised Errors are suppressed. Instead of showing the error message, the functions return true if there were no errors or return false if at least one error has occurred.

Until Business Central 2022 wave 2, if you debugged with breakOnError = “true” even these errors caused the debugger to stop at the line where the error occurred.

With the new version, this parameter has changed. Values true/false are still available, however, they should not be used anymore as they may be deprecated in the future. “True” should be replaced by “All”, and “False” with “None“. Furthermore, there is a new value “ExcludeTry” that behaves in the same way as All EXCEPT for errors in try functions that do not stop the process. In my opinion, it could be really helpful!

BreakOnRecordWrite only for non-temporary records

Similarly to the previous one, there is a new option for the BreakOnRecordWrite parameter – ExcludeTemporary. With this value, the debugger no longer stops at each record modification – it stops only when the “real” record is modified. It is once again a great enhancement, as you usually do not want to debug writes to temporary records, but only to records that really store data.

True/False are also still available, but as with the previous one, they should no be longer used but replaced by All/None.

One of the changes I like most is the possibility to see SQL locks directly in VS Code during debugging. SQL Locks are available directly in the Business Central client for some time, but to see locks when debugging, you had to open another client session and check locks there. It was really annoying, but now it is really simple – it is visible in the “Database statistics” section in VS Code and automatically updated when stepping through the code.

END_OF_DOCUMENT_TOKEN_TO_BE_REPLACED

I’m joining the public BC Base App contribution pilot!

Long-planned change is almost there! Almost two years ago, Microsoft revealed a new plan to allow industry experts to contribute not only to the system apps but also to the base app. And it's almost there! Right now, the repository is available only for pilot members...

END_OF_DOCUMENT_TOKEN_TO_BE_REPLACED 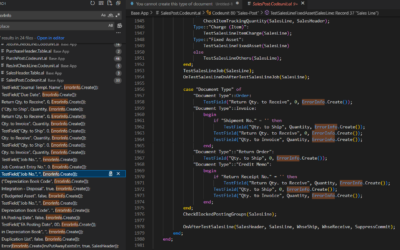 Collectible Errors?! Is it already in use?

END_OF_DOCUMENT_TOKEN_TO_BE_REPLACED

Report objects cannot be extended in versions previous to the Business Central 2021 release wave 1 version when ReportExtensions object was introduced. Since then, many of changes we need to do in reports can be done without creating a new copy of object. On the other...

END_OF_DOCUMENT_TOKEN_TO_BE_REPLACED

With Business Central 2022 wave 1, a new setting for event publishers was introduced. Until this version, any error in any event subscriber caused interruption to the current running process and stopped the whole activity. In some cases (such as log-in), this is...

END_OF_DOCUMENT_TOKEN_TO_BE_REPLACED

As a user of the Business Central you have some constants you can use to filter or insert values. These constants contain useful values for data manipulation such as t / today for date field - return current dateq / quarter for date field filters - return range of the...

END_OF_DOCUMENT_TOKEN_TO_BE_REPLACED

Business Central (cloud-only!) includes one-dimensional (1D) barcode fonts since Microsoft Dynamics 365 Business Central 2020 wave 2 (17.0) was released in October 2020. It is a great improvement to how developers can handle requirements from their clients to print...

END_OF_DOCUMENT_TOKEN_TO_BE_REPLACED 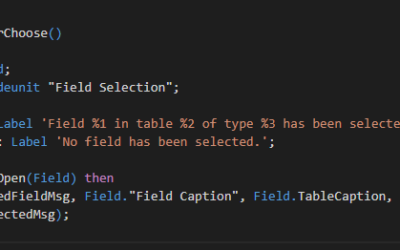 When some complex functionality is developed, it is sometimes necessary to let users choose a specific field. This can be required for field permissions, mapping imported values or any similar process. Earlier, the usual way was to create a link on the Field table...